The first thing that should be noted is that the classic “dcpromo.exe” command are no longer available. Ever since the introduction of Active Directory in Windows 2000 this has been the way to install the AD services on a Windows Server. The new way involves somewhat more steps, but is also more consistent to how other roles/services are installed today. Even as the dcpromo command is quite well-known the idea of installing services through somewhat randomly named exe files is without doubt less user-friendly for new administrators.

Use the “Configure this local server” and select the “Add roles and features” line. 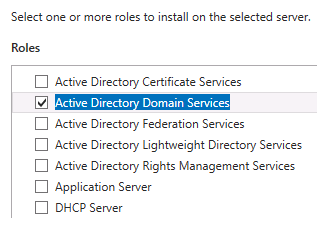 After running through the first installation only the AD binary files has actually been fetched and now the settings available in the old dcpromo tool must be invoked. Find the “All Servers Task Details and Notifications” and select “Promote this server to a domain controller“. This will start a new wizard quite similar to dcpromo.

As usual we will first describe the position of this new DC – perhaps this will be an additional domain controller in an already existing domain or to create a completely new AD domain. In this case the server will be the first DC in a new environment and we select “Add a new forest” and also names the new root domain. 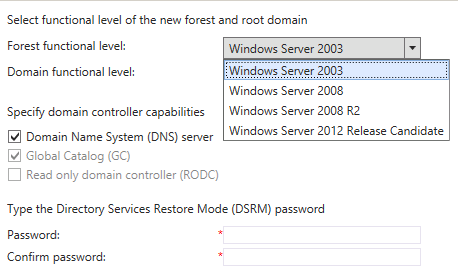 We must now select both the Forest and Domain functional level. One thing to note is that the Windows 2000 level now is removed. This means that the new forest could never hold any Windows 2000 Server with the Domain Controller role, however a Windows 2000 could still be a member server in this domain.

In the same windows we also select to install DNS, add the Global Catalog (GC) role – here mandatory since this is the first Domain Controller and also set the Directory Service Restore Mode password.

Still the NetBIOS name must be selected (above). Remember that the introduction of Windows 2000 twelve years ago was said to “soon” should NetBIOS be out of use?

The final settings are the placement of the Active Directory files. I prefer to have a separate partition just for AD and to place the database and log files apart. The default in Windows Server 2012 is still in the C:\Windows directory. Note that the settings above show all AD files on the still partition and disk. The old advice of keeping all these on separate harddisks are in my opinion not necessary in 95% of domain controller deployment. 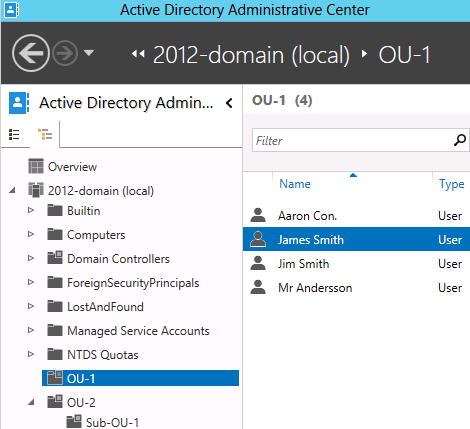