How to troubleshoot Jumbo Frames with VMKping on ESXi hosts or Ping on Windows servers and avoid common mistakes. Learn the correct syntax for VMKping or the ping tests will be useless.

“Jumbo frames” is the ability of using larger Ethernet frames than the default of 1518 bytes. As explained here this could increase the total throughput of the network and also decrease load on both hosts and storage. In this blog post we will see how to verify that Jumbo Frames has been correctly configured and actually is working.

When configuring Jumbo Frames we typically define the new MTU (Maximum Transmission Unit) which really is the payload inside an Ethernet Frame. For ordinary Ethernet the maximum frame size is 1518 byte, where 18 of these are used by Ethernet for header and checksum, which leaves 1500 byte to be carried inside the frame.

Since Jumbo Frames is not really a defined standard there is no actual rule on what MTU size to use, but a very common number is 9000, expanding the payload six times. This also means that the Ethernet frame size is 9018 byte, since MTU defines what could be carried inside the frame.

In VMware ESXi 5.0 there is a lot less work to configure Jumbo Frames than in earlier releases, since we have a GUI interface to change the MTU for both vSwitches and the VMkernel ports. Assuming that this has been done we now want to verify that it is actually working. The best way is to use the ESXi Shell, either directly through the ESXi console or with SSH.

We could now use the vmkping command (vmkernel ping) to try the larger frame sizes. There are however some common mistakes that should be avoided.

With vmkping we could use the -s option to set the ICMP payload size. The first mistake is to set this to 9000 and then try to ping for example the iSCSI SAN target. If this succeeds, as above, we might think Jumbo Frames has been confirmed end to end, but we have really not.

Let us now try with a payload of 20000 bytes – and it works too! Perhaps really giant jumbo frames on this network? This might seems strange, but what is happening is ordinary IP level fragmentation. When IP becomes aware that it has a packet too large to fit into a frame it will be fragmented and all kind of sizes will seem to work fine. If we actually want to force IP to not “help” us with our Jumbo frames test we must attach the -d flag to vmkping, which forbids IP fragmentation. On a Windows server we would use -f.

When IP fragmentation is removed we can see (above) that our ping is failing. This might imply that Jumbo Frames is not working, but it could very well do – since there is another common mistake with the vmkping command.

The -s flag for size is not the total packet size, but the ICMP payload, i.e. the number of bytes after the ICMP header. ICMP itself consumes 8 byte and is on top of IP which has a 20 byte header. 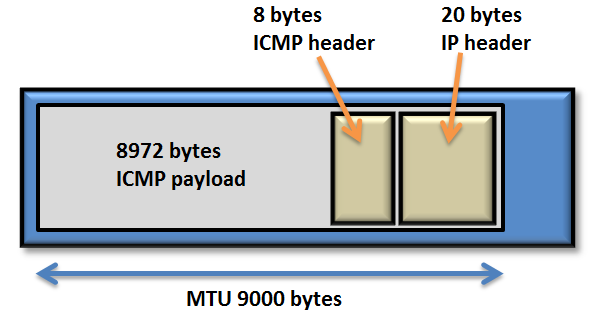 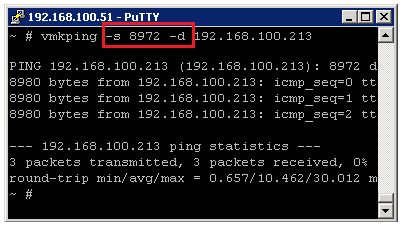 When this works then we have finally proven that the Jumbo frame with 9000 MTU is working from our host through the network to the target.

On Windows Server we could use ordinary Ping in the command prompt with the options -l (lowercase L) for payload length and -f for Do not Fragment: ping -l 8972 -f IP

Remember to test this from all hosts / servers that should be able to access a storage device with jumbo frames. This verifies both host configuration, but also physical switches through the network.