How to use the FORMAT utility for multiple overwrite passes.

As explained in this article there are some important changes in Windows 2008 and 2008 R2 regarding how the formatting of a partition is done. Shortly, when doing a non-quick format the whole drive is overwritten once, compared to Windows 2003 where all information on the main disk area was left behind. 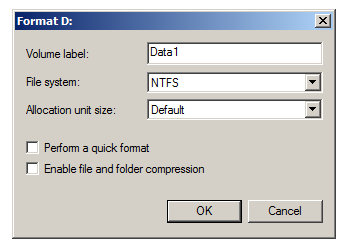 If there is data on a partition that should be permanently and safely erased there are plenty of third party tools that could do this, but it is important to know that we have some possibility already builtin. However, when using the graphical Format utility there are not many options available, but a lot more in the command line version (the classic format.com).

From Windows Server 2008 and forward there is a new, and quite unknown, option for multiple overwrites of the disk area. You could select the number of times the partition should be completely zeroed out, to make any attempt for recovery nearly impossible.

The number of passes is expressed with the new option /p. In the example above we select four passes of zeroing before the new and empty logical NTFS file system is created. The time for then completing the erasing operations will naturally depend of the size of the disk, the number of passes and the performance of the disk itself.