How to enable Jumbo Frames on ESXi 4.1 through the command line interface and GUI.

In ESXi 4.0 the actions for enabling Jumbo Frames on Vmkernel interfaces was a bit difficult, since it was command line only and also was only possible while creating the VMK at the same time. If the Vmkernel interface was already in action it had to be deleted and recreated.

In ESXi 4.1 it is somewhat easier and if the vCenter Server has been upgraded to version 5.0 it is very straight forward even on the ESXi host with 4.1.

Since these actions make changes to important settings it is recommended to first put the host into maintenance mode and migrate all virtual machines to other hosts.

In a pure 4.1 environment you will first have to enable ESXi Shell or SSH to gain access to the command line interface (or use the remote vCLI utilities). After this connect through the console or SSH client and check the Vmkernel portgroup name where you want to use Jumbo Frames, typically on IP storage networks.

Note the correct portgroup name, in this example the VMK1 with the name “VMkernel”. Note the MTU row and that the default 1500 bytes is the present value.

Verify with the -l (for list) parameter to make sure that the MTU has been raised.

Note the vSwitch name (case-sensitive) and then use the command: 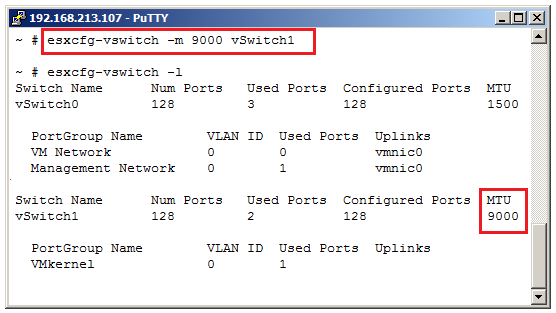 After raising the vSwitch it is important to test that the larger frames work. Use the vmkping command to verify end-to-end connectivity – see this blog post for the correct switches.

If you have upgraded the vCenter Server to version 5.0, but still have ESXi 4.1 hosts you could actually do all actions by the graphical interface in the vSphere Client. 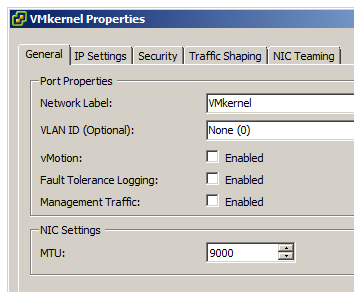 Just go the configuration tab on the 4.1 host through vCenter and on Networking set the Vmkernel and vSwitch MTU as on a 5.0 host. The ability to use the graphical interface in vCenter for Jumbo Frames settings was a great new feature in 5.0.