How to verify if VMware VAAI is supported on the datastores is not totally straightforward. We shall see how to do this from both the GUI in vSphere client and from the command line through SSH.

The VAAI (vSphere API for Array Integration) is a very useful technique to offload demanding storage tasks directly to the SAN. See this post for more details on the VAAI workings.

When using the vSphere Client and select the Storage screen in the Configuration tab the following view could be seen:

The “Hardware Acceleration” tab shows the VAAI support, but unfortunately somewhat unclear. (Note that the tab is located quite far to the right by default.) Three different modes are possible: supported, unsupported and unknown.

VAAI consists of four different offload primitives, called ATS, Clone, Zero and Delete. If all of these are supported by the Storage Array the vSphere Client will show the Hardware Acceleration as “Supported” and if none of them are supported by the SAN then the status will be “Unsupported“.

If however one or more VAAI primitives, but not all, are supported by the SAN then the status will be the somewhat unexpected “Unknown“. This means that “Unknown” does also mean partially, even if that word is not used.

If using the command line, either from the ESXi Shell or SSH the status could be seen in a more granular way. Use the esxcli command to display the VAAI status: 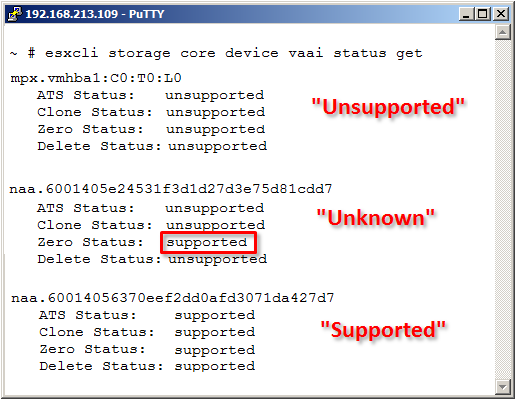 The first disk device does not support any of the four VAAI primitives. In the vSphere Client this is displayed as “Unsupported“.

The second SAN LUN does support the Zero primitive, but not the other three. This will be presented as “Unknown” in the Hardware Accelaration tab in the GUI.

The third and final LUN does support all of the VAAI offload methods and displays “Supported” inside the vSphere Client.

If possible, the best way to really verify the status of VAAI is to use the command line, but if the graphical vSphere Client displays the Supported status than it means that all offloads are available.

3 thoughts on “Verify VAAI from GUI and command line”