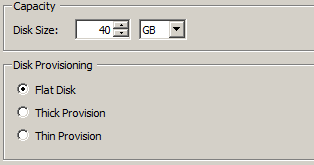 In vSphere 5 Release Candidate (Beta) some names for the virtual hard disk types have changed and some old names, for example “Thick Disk”, has been given a new meaning.

EDIT: Several of these names was changed when the final version of 5.0 was released.

When creating a Virtual Machine in ESX/ESXi you always had some interesting choises for the type of hard disk given to the guest operating system, which would affect SAN usage and write performance. The disk types are the same in the vSphere 5 Release Candidate, but with changed names. To add to the confusion there has always been somewhat different names in the command line tools too.

The new disk name called Flat is the old Thick, where you allocate all disk space on the data store when the virtual hard disk is created, but we do not overwrite the physical disk sectors until they are used within the guest operating system. That is, the disk is created fast but with a slight lower guest write performance at first access of new areas of the disk. The Flat disk type was called Thick in vSphere 4.x. As before, this disk type is the default.

The name Thick is the old Fault Tolerance Disk, which was a somewhat misplaced name in vSphere 4.x. The name referred to that the feature Fault Tolerance (FT) demanded a disk of the “EagerZerodThick” type and to reflect this the name of Fault Tolerance was brought into the GUI. This disk type also allocates all the disk space at creation time, but overwrites (zeroing) all disk sectors immediately. The “eager” zeroing actions done makes the disk creation time much longer, but gives a slightly better write performance in the guest operating system.

(Note also that in VMware versions 3.x the command line disk type “thick” existed, but was different from the two Thick types above.. This third version of “thick disks” was removed in vSphere 4.0.)

Finally the Thin disk which is the same as before in terms of names. Be aware of how the formatting is done inside the guests if using Windows 2008 or later, or else all disk space is consumed right away.